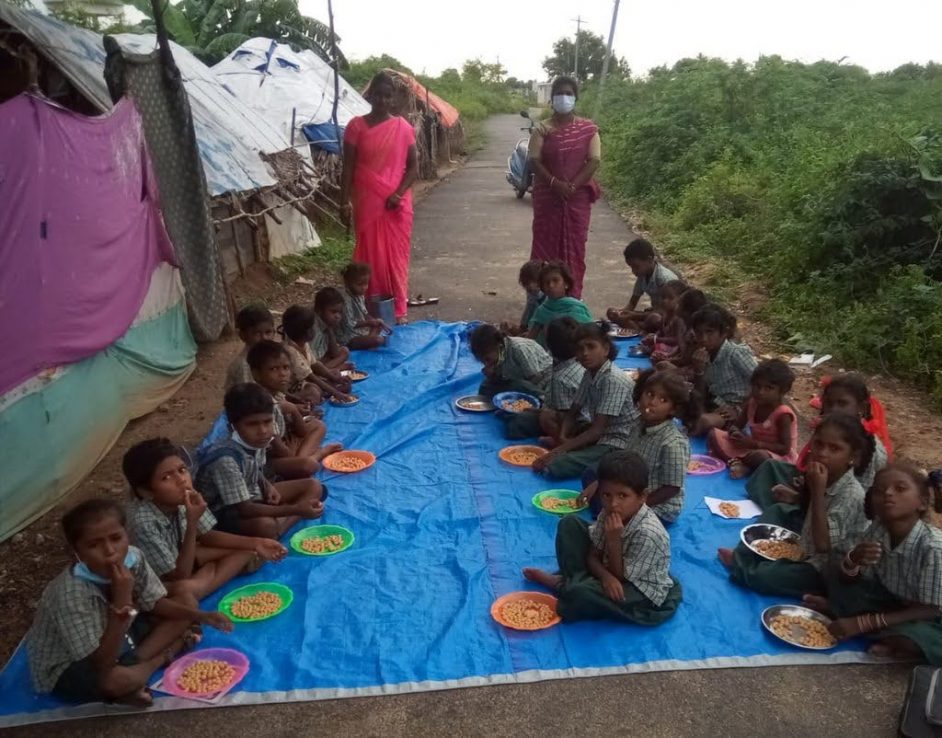 This report is written by Rajaraman Krishnan, Asha Chennai Coordinator.

With the school reopening in Tamilnadu on Nov 1st, many of our mini-schools wound down. Some mini-schools are still continuing thanks to the passion of these teachers. Nutrition support through Project Arogyam is also continuing in 6 schools.

Schools in Tamilnadu finally opened on Nov 1st after a prolonged closure of 1.5 years! During the school closure Asha Chennai had been running mini-schools. Further in some of the poorest areas we were also running Project Arogyam to supplement the nutrition they were getting with a nutritious snack every day. Open of the schools and the concomitant starting of the midday meal program made us evaluate the continuation of both of these programs.
Click here for more photos covering all the topics in this report.

Continuation of Mini-schools in Thiruvallur
In my discussions with the teachers at project Sangamam, many of the teachers felt a deep emotional connect to the children they have been working with for the last year and a half and wanted to continue the mini-schools. Many of the children (esp older girls) were concerned about what will await them in their schools and also wanted the mini-schools to continue. With a regular day-work, this was clearly going to be difficult for the teachers. Further, incentivising the running of the mini-schools may jeopardise their regular work which is also not good. Therefore, at Asha we decided to not strongly incentivise or urge the teachers to run the mini-school. They are just paid a token amount as extra salary if they chose to run it. But Asha will support the mini-school. The costs like stationery items etc. will be met by Asha. While they may not continue indefinitely, they will perform a valuable function during the transition period from mini-schools to schools. Also Asha mini-schools with their emphasis on conceptual clarity through activities will provide a good counter balance to the schools with their emphasis on textbook and practice oriented teaching. Also unanticipatedly, with all the school closures declared due to the rains, our mini-schools once again with their decentralised operations continued to work unlike the centralised schools. Here are some pictures from our mini-schools.

Continuation of Arogyam in Thiruvallur
The hamlets covered by Arogyam at Thiruvallur were very poor Irular hamlets. They were places where we wanted to have a nutrition program even earlier before we were running our mini-schools. Now that we had started the program thanks to our mini-schools, we did not want to stop that. But, these hamlets were also not where any of our teachers come from and they all involved a bit of travel for our teachers. So we couldn’t continue Arogyam in all the places. We are continuing it for now at 3 of the places.
Two of our teachers, Tamilselvi and Iswarya, are teaching the mini-school at Old Thirupatchur. They approached me 2 or 3 months back and told me that they would like to continue teaching the children at Old Thirupatchur in the evenings even after the schools reopen. They did not even want any additional salary for this. They just did not want the gains that have been achieved to be lost. As this was also one of the poorest places where we have project Arogyam, we were happy to continue that. Tamilselvi and Iswarya have been taking the mini-school from the start of the month. Even on days when there are rains, they have gone and distributed the nutrition to the children.

On some days when they couldn’t even assemble the children, they have even gone door to door and distributed the nutrition to them. A bridge which connects their village to Old Thirupatchur collapsed. They come by auto up to the bridge and then cross over by foot! The children from the brick kilns couldn’t cross over to the mini-school area on very rainy days. Once again the nutrition was taken to the brick kiln!

At Annanagar, we have a longer history of engagement. We have built a library building inside the school campus there and were running the library in the evening. Also the entire student population of the school come from the large Irular hamlet there. The nutrition happened in the school. Our teacher Geetha at the school manages the nutrition program.

But during rains they happened in the library. We have hired a teacher, Nivetha, to run the library as an activity centre. She runs the library on most days even when the school is closed but the rains are not too much. On these days the nutrition is provided at the library or if the rains were too much outside the library.

On a couple of days, due to some flooding, the villagers were accommodated in the school. Nutrition continued even on those days! And food was distributed even to the other villagers staying in the school. One of the days, the teacher Geetha’s husband and one of the government teachers sponsored full food for children.

Continuation of Arogyam in Pearl
At Pearl too, at places where we could continue targeted nutrition support to the poorer children that we were serving, we are continuing the project. We are continuing it in our library at Nagalapuram, at the school in Athikinaru and the Kindergarden classes in Koovachipatti.
At Nagalapuram the children were being served nutrition in the morning at our library before they go to school. About 30 children from the Sakkiliyar community who are very poor and orphans have been selected and provided this nutrition support.

At Athikinaru where about half the children are from the marginalised Narikoravar community which needs this support. The head-mistress had taken ownership of this and is serving these children in the school during the break at 11:00.

At Koovachipatti, the extra nutrition keeps the young Kindergarten children’s energy levels up. We serve them at school at around 12:00. Here are some photos.

My Site-Visit on 19th and 20th Nov
I got to visit the nutrition distribution at two of the Thiruvallur mini-schools on the 19th. I also visited four other mini-schools on 20th November. This trip was however an odd one. The original plan was to visit schools on the 19th and then have a meeting with our Kanini trainers on the 20th. However, they announced the closure of the schools due to rains on the 19th. As the rains were not heavy we called the trainer over for the meeting to our office on the 19th. What we didn’t anticipate was that due to the previous days’ rains, all the reservoirs were opened on 19th causing several bridges to get breached. So both the major highways from Thiruvallur leading to Thirutani on one side and Uthukottai on the other were closed. This caused a lot of hardship for the teachers. Anyway with the intermittent pauses in the rain, I got to see the Arogyam project in action at Thozhudhavakkam and Old Thirupatchur on 19th.

I was hoping that I will be able to visit the schools at least on the 20th. Schools were declared to be closed also on the 20th. The trip however didn’t turn into damp squib. Even though 20th was a Saturday, the teachers decided to keep the mini-school open partly because I was visiting and partly because it was closed a couple of days in the previous week. Therefore, I got to visit three mini-schools at Ariyapakkam, Athivakkam and Kannigaiper on that day along with our library at Annanagar. All the children were happy that the mini-schools were continuing. They weren’t pressured to attend them in any way.

At Annanagar I could see the problem mentioned earlier of lots of younger children in the 1 to 5 age group also coming to collect the nutrition. Actually as this was a Saturday, we weren’t serving nutrition on that day. But all the children had still brought their cups and vessels to collect the food. Some of the children were walking away when we were entering the library. As an explanation, a boy told us they were giving any Sundal that day! Even inside the library there was a huge crowd who were only interested in the nutrition and not particularly interested in any of the stories or activities we were doing. We had to convince them there wont be any nutrition that day before they would leave and I could tell some stories and interact with the children.

As I was travelling through Thiruvallur it was an experience to see all the rivers in spate. I got to see the Arani, Cooum and Kosasthalayar rivers in their full glory. They are usually just sandy stretchers with occasional puddle. But now they were raging rivers! Annanagar is located right on the banks of Kosasthalayar. We walked through the village to reach the river. Unlike any of my previous visits, as soon as I entered the village we could hear the ominous sound of rushing river even thought the river was a good 200 meters away. There is a 10 feet high bund that separates Annanagar from the river. We climbed that and got a view of the check dam and the raging river. Two days earlier a bunch of boys had jumped into the river for a swim and one 8th std boy had drowned! In 2015 the bund got broken and the entire village was flooded. With the ominous sound of the raging river, I must be difficult to even sleep in Annanagar these days.