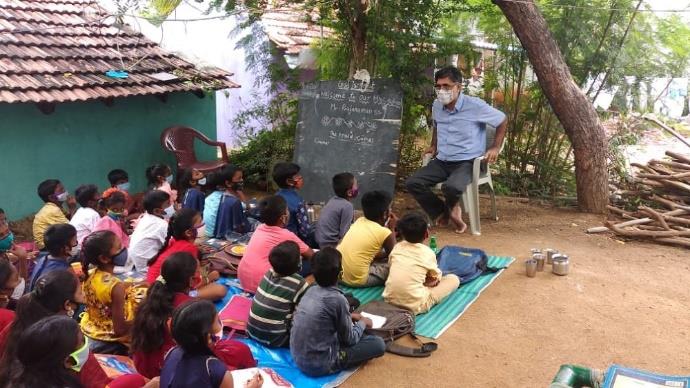 Our volunteer Rajaram visited the mini-schools and libraries run under Project Thulasi on Sept 3rd and 4th.

Click here to see photos from the site visit.

I am Rajaram, a volunteer of Asha Chennai and I visited the Thulasi project area on 3rd and 4th of Sept. I left from Chennai at 6:15 am on 3rd Sept and after a breakfast along the way I reached Senji by about 9:30. Thulasi project coordinator, Dhinakaran, joined me there and took me to all the places.

Asha Chennai has been running mini-schools all over Tamilnadu during this pandemic from June 2020. This academic year too as the schools continue to remain closed, Asha Chennai has continued to run these mini-schools wherever we have a presence. At Thulasi project we are running 8 mini-schools and also a couple of libraries and a tuition centre for older children.

Here the mini-school was taking place inside the school itself. This meant that all the children in the school was coming to the school. But the govt teachers weren’t teaching the children and all the classes had to be looked after by our teacher, Sangeetha. The 5th std children come every day for 3 hours and full day on Fridays.

Mon to Thur, classes 1 to 4 come on one of these four days for 3 hours. This was based on what the school HM wanted based on this misplaced idea that education of the older children who are passing out of the school is somehow more important! We couldn’t really do much to change that and given that all the children are getting some education, we have been implementing this same system.

I interacted with the 5th std children. The children were good. I tried my usual word problems with large numbers to see if they recognised the operations. They did. Then I played the usual game of counting the circles which are drawn in some patterns. Children were quite comfortable with multiplication and could see patterns in it that even I had missed! I did my usual 400 + 3000 = 7000 and the children caught my mistake immediately! Even other than these, the school was functioning well. I briefly talked to the HM and then moved on. 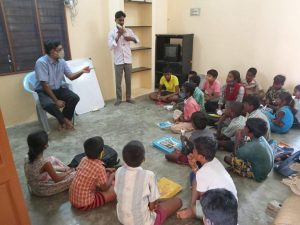 Nallan Pillai Petral is a big village and two of our teachers are running mini-schools in two different parts of the village. We visited the mini-school run by Manimozhi. The children interacted well with me. But their Maths was quite weak. They couldn’t catch on to the problem in 400 + 3000 = 7000. They had problem writing numbers like 2076 and 4103. They also struggled with multiplication etc. Manimozhi needs to work more to strengthen their basics. We then distributed our nutrition snack for the children. This was also a little disorganised as the children did not have any plate to receive the Sundal and Sathu maavu urundai that were served that day. We gave these feedbacks to Manimozhi as well. 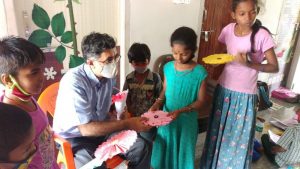 We just peeped into the library at Kaatu Sithamboor before heading to Kamagaram. We could just see the place and the librarian as the children come only in the evening. The mini-school at Kamagaram was taking place at our teacher Vasugi’s home which was right next to the school. Between her two batches, pretty much all the children in the school are coming to the mini-school. The children showed me some nice craft work that they have done. The quality of the work was very good. I gave word problems with big numbers to see if the children could recognise the operations but they really couldn’t. I explained multiplication and division to them and asked the teacher to once again focus on strengthening the basics.

Our usual halt for lunch during these Thulasi trips is Kanniyampoondi and this time was no different. The school HM, Mrs. Ramani, always invites us and provides us wonderful lunch. We enjoyed her hospitality during this trip as well. Before the lunch we interacted with the children a little. 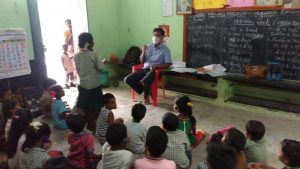 This school posts a lot of science experiements in our Whatsapp group. I asked them to describe and explain the various experiments they have done in the past. The very impressive thing here was that many of the children have got enthused enough that they do these experiments on their own even at their homes. One brother (4th std) sister (2nd std) pair were especially impressive. They see Youtube videos and try various experiments on their own!!!

After lunch I talked to them a little on Maths etc. On that they children have slipped a little bit. This is despite the fact that this was functioning more or less normal school hours with both the govt teachers and an Asha teacher working full time. The teachers were saying that there was a lack of seriousness among children etc.

The school HM also took us to the village library building which was currently not functioning. The school and the village is hoping that Asha appoints a librarian and make the place functional again. The building was nice and fairly close to the school. It would be a pretty good addition to our project.

This is the second Asha mini-school in Nallan Pillai Petral. This was run by our teacher Sathya. At one time her sister Sandhiya was also an Asha teacher. I got to meet her too at Sathya’s house. The school was running well and the children were also very interactive. The children showed a science experiment that demonstrates that cold water is more dense that hot water. Then there was a story telling session. The children told me some stories and I also told them a couple of stories. I also told them a story in English which they understood quite well. I then did the count the circles activity which also they did well. We are implementing the Arogyam project in this village. The nutrition item that day was a Ragi koozh. It was well prepared and I also liked it! I also distributed it to the children before leaving. 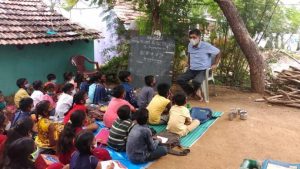 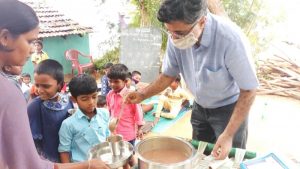 We then took a long drive to Seeyapoondi and reached there by about 5:00 pm. This was the village of the project steward Paripooranam and the project in this area had started here. We are running a library here and also a tuition centre for 9th to 12th std children. 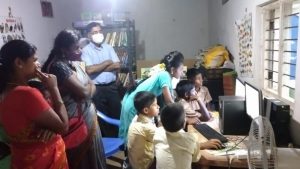 I first visited the library. Paripooranam also joined me here. They had conducted a computer course here for 6th to 12th std children. Computers had been brought here from the rest of the project. When we went in, younger children were happily playing some games in GCompris. The deal was that they have to read a book to get computer time. This was working w 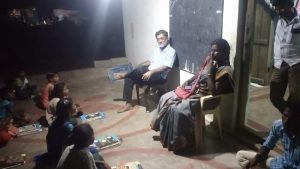 ell! Then the computer class children came over. I tried one exercise on them. I changed the file extension and wanted them to find a way to open the file. They weren’t able to do that but they were doing meaningful attempts.

After interacting with them for a while we went to the tuition centre. There we met the 9th to 12th children. With exams cancelled and pretty much no education taking place, even the tuition centre was closed for much of last year. The children were a little reticent to talk. We talked to them about evolution, photo-synthesis etc.

Marutham for the Night

I went with Paripooranam to Thiruvannamalai. She works as a teacher at the Marutham farm school. I also know the founders of the school Arun and Poornima. I stayed there in one of the houses in the school. I enjoyed their company, a good dinner and a good night’s sleep. 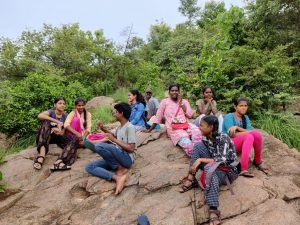 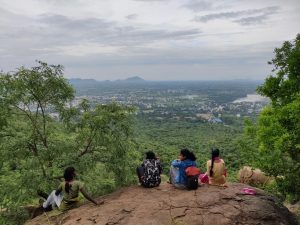 Every Saturday morning the school organises a nature walk through the Arunagiri for their school children. Paripooranam invited me also for that. That was a wonderful opportunity. The weather was also perfect for the morning walk. The company of 7 or 8 energetic kids was also very enjoyable. Another teacher Mr. Senthil also accompanied us

I also used the opportunity to meet couple of students who had applied for the Asha Chennai scholarships. We needed some more details about their application. I did this when I was there. We got a little delayed because of these. We started at 10:00 from Marutham for our first mini-school right in Thiruvannamalai.

One of our teacher who hails from Thiruvannamalai but works at Nallan Pillai Petral has been running a mini-school from her house in Thiruvannamalai this year. I went there with Paripooranam. She typically runs the school in two batches. But because of our visits, both the batch of students were there. 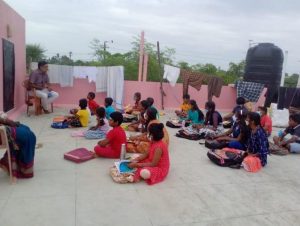 The children mostly attend private schools in the vicinity. I talked to them a little bit about their online classes. For most part these are just not working for younger children.

After that we had a story telling session. I told them a story in English and they understood quite well. I also told them the 3-children playing with a flute story. They could discuss the nuances of the story. This school is clearly doing well. After spending good time with them we moved on.

We then drove towards Senji. Keezh Pennathur comes mid-way between Thiruvannamalai and Senji. We met an ex-Asha t 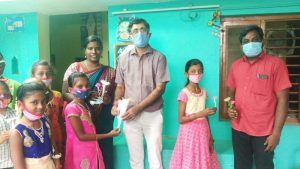 eacher Saravanan. He is currently a government teacher. We also picked up our coordinator Dinakaran. We then proceeded for a few more kilometres to reach Semmedu. Our teacher Girija’s house is right on the highway. The children welcomed us with nice bouquets and craft work that they have done at the school. The children showed us a couple of science experiments. In one they put salt on ice to show how water that has melted refreezes with salt as salt water has higher freezing point. In the second one vinegar and baking soda in one bottle releases CO2 which pushes the water in the next bottle which makes water come out of a straw. Both of these were quite challenging experiments and they didn’t work too well. I then did the circle counting activity with the children. The children here once again were good with multiplication and at seeing patterns.

We then drove back to Keezh Pennathur. Saravanan took us to a library run by unorganised workers’ federation. They have a good collection of books but are now unable to appoint a librarian to run the library. The library is also very close to the primary and a higher secondary school. They wanted Asha to take over the library and run it. It would be good if we can support this. After a quick lunch there, we went back to Seeyapoondi.

The mini-school for class 1 to 5 children was taking place in two batches at our tuition centre. I interacted with the children. They showed me a couple of science experiments. One of them was how a candle is extinguished 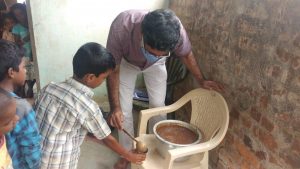 when covered by a bottle and the water in the plate below gets sucked in. Then another one showing how a lemon sinks in normal water but floats in salt water. I tested the basic knowledge of place value (with 400+3000 = 7000) and told then word problems in which they have to recognise the operation involved. Their basic Maths was quite weak. This school was also covered under the Project Arogyam. We gave them Ragi Koozh for nutrition that day. I also got to taste it. It was quite good.

After that I met with the teachers of the Thulasi project. All the other teachers had also come to Seeyapoondi. I talked to them about the importance of the w 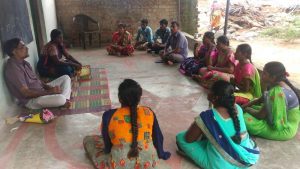 ork they are doing in sustaining the education of the children coming to their mini-schools. We discussed how we will handle the reopening of the schools. How to wind down the mini-schools, how to bring the children back up to their level etc.

After the meeting with all the teachers, I left back for Chennai. On the whole I had a really enjoyable trip. The schools here were also doing a very good work.