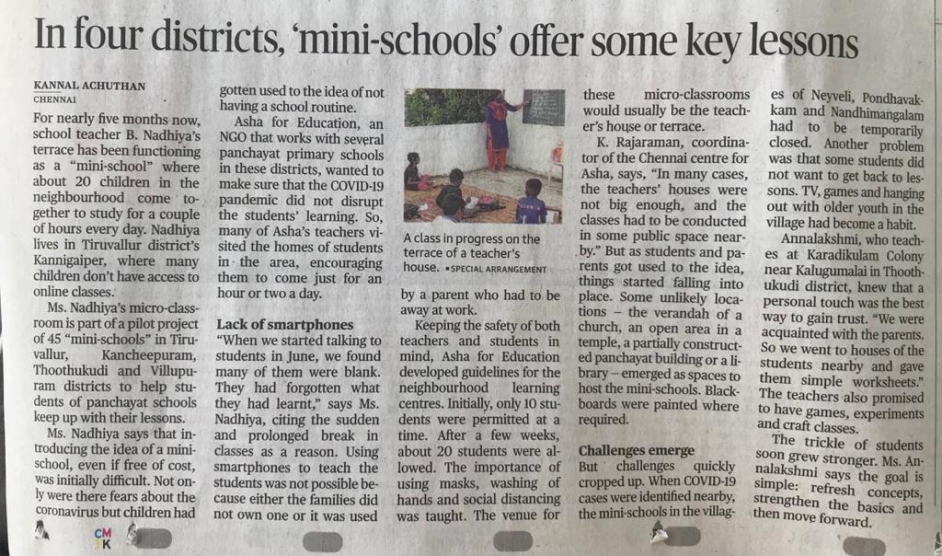 The Hindu wrote a detailed article on Asha Chennai’s mini-schools.

Micro-classrooms and mini-schools have begun as pilot projects by an NGO in several districts, where 20-odd children study with a teacher on terraces, verandahs and other open spaces in villages

Click here to see the article from The Hindu.

For nearly five months now, school teacher B. Nadhiya’s terrace has been functioning as a “mini-school” where about 20 children in the neighbourhood come together to study for a couple of hours every day. Nadhiya lives in Thiruvallur district’s Kannigaiper, where many of the children don’t have access to online classes.

Ms. Nadhiya’s micro-classroom is part of a pilot project of 45 “mini-schools” in Tiruvallur, Kancheepuram, Thoothukudi and Villupuram districts to help students of panchayat schools keep up with their lessons.

Ms. Nadhiya says that introducing the idea of a mini-school, even if it was free of cost, was initially difficult. Not only were there fears about the coronavirus but children had gotten used to the idea of not having a school routine. Asha for Education, an NGO that works with several panchayat primary schools in these districts, wanted to make sure that the COVID-19 pandemic did not disrupt the students’ learning. So, many of Asha’s teachers visited the homes of students in the area, encouraging them to come just for an hour or two a day.

“When we started talking to students in June, we found many of them were completely blank. They had forgotten what they had learnt,” says Ms. Nadhiya, citing the sudden and prolonged break in classes as a reason. Using smartphones to teach the students was not possible because either the families did not own one or it was used by a parent who had to be away at work.
According to the Annual State of Education Report (ASER) based on a survey in September, about 30% of government school students in Tamil Nadu could not receive learning materials due to lack of smartphones.

The mini-schools wanted to provide a solution. Keeping the safety of both teachers and students in mind, Asha for Education developed a set of guidelines for the neighborhood learning centres. Initially, only 10 students were permitted at a time. After a few weeks, about 20 students were allowed. The importance of using masks, washing of hands and social distancing was taught. The venue for these micro-classrooms would usually be the teacher’s house or terrace.

K. Rajaraman, coordinator of the Chennai centre for Asha, says, “In many cases, the teachers’ houses were not big enough, and the classes had to be conducted in some public space nearby.” But as students and parents got used to the idea, things started falling into place. Some unlikely locations — the verandah of a church, an open area in a temple, a partially constructed panchayat building or a library — emerged as spaces to host the mini-schools.

But challenges quickly cropped up. When COVID-19 cases were identified nearby, the mini-schools in the villages of Neyveli, Pondhavakkam and Nandhimangalam had to be temporarily closed. Another problem was that some students did not want to get back to lessons. TV, games and hanging out with older youth in the village had become a habit. So the teachers had to start an awareness campaign in earnest.

Annalakshmi, who teaches at Karadikulam Colony near Kalugumalai in Thoothukudi district, knew that personal touch was the best way to gain trust. “We were acquainted with the parents. So we went to houses of the students nearby and gave them simple worksheets.” The teachers also promised to have games, experiments and craft classes.

The trickle of students coming to the mini-schools soon grew stronger. Ms. Annalakshmi says the goal was simple: refresh concepts and improve understanding of the basics; then, move forward.

The teachers, who have experience in activity-based teaching, used charts and simple experiments. Ajeesh, a Class 6 student in Karadikulam, and his friend made paper windmills to study wind energy. “Craft class is my favourite,” he says.

Asha has had to respond to various needs along the way. Many of the teachers’ homes did not have blackboards. So a painter was hired to paint blackboards on terrace walls and in front porches where possible. In all the centres, students were given masks and also taught to make thir own. Some laptops were provided to offer technology-assisted learning.

Mr. Rajaraman says, “We created a WhatsApp group for the mini-school teachers… Teachers post photos and videos of activities conducted in their schools in this group. We often see one good activity conducted by one teacher spreading rapidly to all the other schools.”