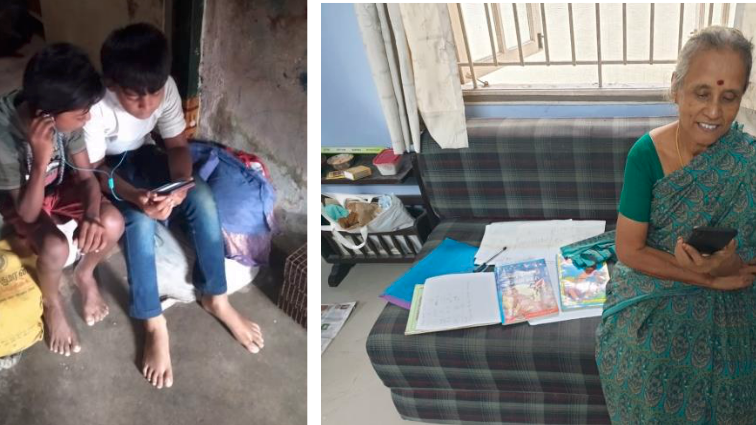 With the restrictions imposed by Covid, Asha Chennai is continuing the work of educating the Narikorava colony children through hybrid strategies.

The COVID brought education of the children to a standstill in March 2020. The gypsy children were quite happy about the early and extended holidays they are got. It had taken a lot of effort to bring in the gypsy children into the school system and ensure their continuation in the school. We were concerned that the long gap may affect the re-entry of some children into the school system, particularly the older girls and boys, hence we started getting in touch with the parents and children and started online classes for them.

We began online classes for 2 boys of class 10 and 12 in May itself. In June we decided to start classes for all the remaining children. Initially, we formed a what’s App group of all the phone numbers we had of the gypsy children and ambitiously started sending some English videos, songs and worksheets to the group. The teachers started following up with the children individually and we got to know about several problems. Some children said “Suthinde Irukku”- probably they couldn’t download the video because of the slow net. In some cases, the parent had the cell and had not passed on the information to the child. ‘No charge’ was a problem with some. We soon realized it wasn’t working and abandoned the what’s app group altogether and decided to identify individual children with whom we could work with.

We divided the children among ourselves. Project teachers dealt with younger children, while I concentrated on 10 and 12th children. For those who had access to the cell in the mornings, classes were scheduled in the morning and to others in the evenings or in the late afternoon when their parents returned. It was a struggle for the teacher and child initially. Once the lockdown was relaxed the teachers visited the colony and handed over sets of worksheets in maths and languages twice a week and these were then followed up in online classes. The children who had no access to phones were also given worksheets and these were collected back.

Teachers found math teaching online more difficult. Having some educated gypsy boys and girls in the colony was indeed helpful. The teachers constantly persuaded the older children to guide the younger children and send a photo of the math worksheets. The older boys also guided the high school children in downloading the zoom app when their school online classes began. Once the textbooks were available to the children, the teachers have begun to use them in online classes with some children. For others, however we continue to give worksheets every week and making all efforts to cover all the children in the school.

As for 12h and 10th children, Vikram and Arjun, we were able to teach over the phone, from the month of May, even if the net was not available, as the child had the printed study material in hand and we had a copy in our systems. We focused on languages first. While the teachers attended to Tamil, I focused on English. Soon access to the net became a necessity when we had to share other learning material. By then schools too began their online classes. So the project
supported them for net connection so that they could attend school online classes regularly. None of the children are watching the programs telecast on Kalvi TV as the cable operator in the colony do not seem to be providing these connections.

In July Vikram, the class 12 child’s phone broke and he stopped attending school online classes altogether. The school teachers got in touch with us and requested that he be helped. So the project provided him with a cell phone for temporary use. We are monitoring the classes on a
daily basis and getting feedback from the school about the attendance. We are also helping the children by simplifying the notes of their lessons, explaining to them and seeing that they are catching up.

A retired Principal of Govt. teacher training college. Mrs.Vijayakanthi offered to volunteer for an hour. So we linked her with three RTE children studying in Matriculation schools. While she taught English, the project teachers followed up with Tamil and math. The children were in fourth and fifth classes and all three of them usually sit in front of one cell. Often if children could see the teacher, they couldn’t see the material in the cell, she said. So she makes the children copy the material sent in advance and then interact with them. Her feedback is that there are lots of distractions to the children and making them concentrate for long is a struggle. Sometimes the children say the audio is not loud enough. At times other adults peep in and sit along. Once someone with a baby sat next to the children and was playing with the baby ignoring the class in progress and she had to make him leave the place. In the middle of the class children want to sharpen their pencils and move off the screen for a while and she has to wait staring at the blank cell. If they are interested or if one of them is away, they switch off the phone. But on the whole, she says they are progressing and she is trying hard to connect to the children and keep them engaged.

Thilothama, one other RTE child is missing all her online classess as she does not have working cell phone. We are trying to see whether we can fix the problem of her cell. Two other older girls are travelling this month so we are unable to cover them through online classes.

In kottur, the HM of the Kottur school had given a cell phone to the class 10 child, Santosh and had given instructions to Geetha Natarajan, project teacher, to follow up his education. The school teachers too conduct online classes and share with Geetha all educational videos, assignments, test details. Geetha ensures that the lessons are understood, checks the child’s work and forwards it to the concerned teachers. Besides Santosh, the school has asked her to help a few other slow learners in class10. She schedules classes for a couple of class 9 gypsy children late in the evening due to the non-availability of cell phones in the morning. She lives in Kottur and often sees some of the older children going to work with their parents. This is causing concern as it has taken a lot of effort to bring the children this far. Prolonged closure may result in some children not getting back to school at all or losing touch with their studies and eventually dropping out.

Sridurga and Jayalkshmi are contacting the primary children and conducting classes for them online. Many of the problems mentioned above report are reported from Kottur too. Sometimes repeated calls have to be made to get the classes started. Sometimes children are playing and do not attend to calls. If one child’s cell is not working or the parent is out, another child is contacted after a series of phone calls. The teachers find it extremely stressful when children
don’t turn up at the scheduled time and they have to alter their plans. Nevertheless, the children who are studying regularly are enjoying the interaction with the project teachers. Every week storytelling is also scheduled so that the children attending the classes do not drop out. We were unable to send across worksheets physically in June as the colony was surrounded by containment zones.

Uma maheswari who lives in the colony wanted to resume the tuition classes in August and we were hopeful that through her we can teach some more children inside the colony. However, next uma’s house, a family was quarantined earlier and the children were hesitant to go that side even after the quarantine period was over. So we asked Uma to defer her tuitions to the month of Sept. She can be the link with the community and parents and coordinate with the teachers and ensure that they are ready for online classes and also reach worksheets to the children in the colony.