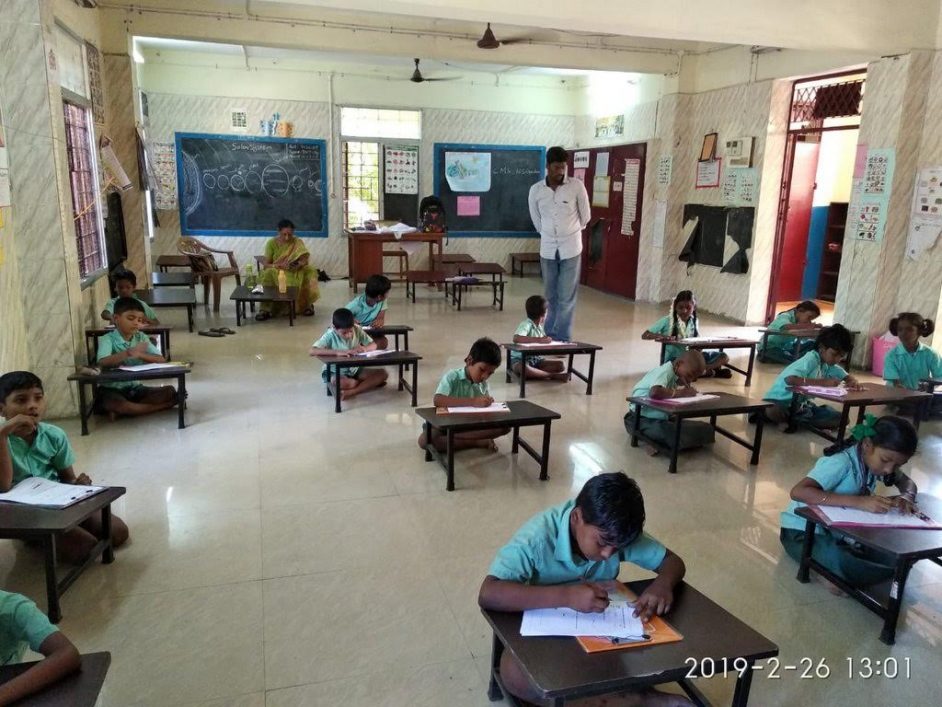 Click here to see all the photos from the written assessments conducted in 2019.

There weren’t any major changes in the way the assessments were conducted. We have started collecting detailed student level social data to go along with our assessment data. These include,

This year too the papers were set by our own lead teachers in English and Maths, Radhika and Nathiya respectively. Over the months of December-January we designed the assessment papers. The Maths papers were reviewed by Mrs. Meena Suresh of Ramanujan Museum and Centre for Math Resources. In Maths, we aimed to set the papers with the same coverage and at the same level of difficulty as last year. While the other papers were of similar complexity, the 4th std paper was a little more difficult.

Our English tests was reviewed by Mrs. Jayashree Arun, a volunteer of Asha Chennai and works at P.S. Senior Secondary School in Chennai. Like in Maths, we aimed to make the papers have similar coverage and at the same level of difficulty as last year. Here too the 4th std paper turned out to be a little more difficult.

On Feb 25th Rajaram trained the teachers of Poorna Vidhya. On that day assessments were conducted at CHS Canal Bank Road and CMS Thiruvalluvarpet. With the lead from two of the computer teachers Jayalakshmi and Arputha Durairaj, they then conducted the assessments at all the other schools in Chennai including Olcott Memorial school.

The rules followed by the teachers while conducting the assessments were the same as last year. I am glad to report that there were no major malpractice at any of the places. At only one did we have a problem with a teacher telling the children how to answer the questions. There were for sure instance of children copying from each other. But that wasn’t significant enough to influence the data collected.

This year’s correction had a large participation from the volunteers themselves. I believe this helps the volunteers understand where the level of learning by the children is at. Usually most people coming from educated urban families who have themselves gone to premier schools do not have much of an idea about the state of education in India.

We followed rules similar to last year to ensure consistency in the corrections. Also the software infrastructure created for processing the assessment grading worked smoothly this time also making it a fairly straightforward process. The results from most of the schools were available before the end of March!

Analysis of the Performance

We have not taken this up yet. I will update this report at that time. In addition to all the analysis done last time, we are planning to work with IIT Bombay Education and Technology department to analyse the assessment performance in relation to the various school level and student level data that we have collected.