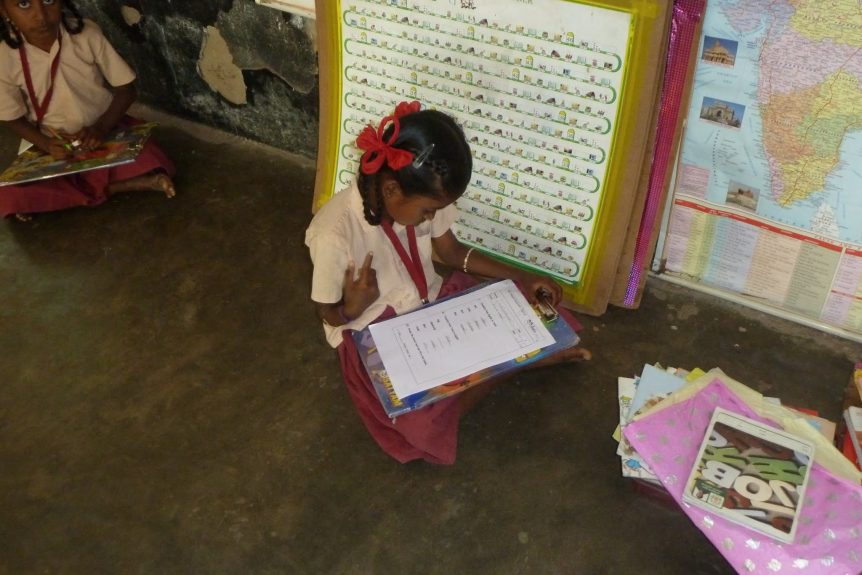 Written assessments in English and Maths were conducted at all the Asha Chennai supported schools from Feb 14th to March 10th. It was conducted in 55 schools covering over 3300 children. The papers have been graded and reports generated for all the schools (and dynamically viewable from our server). Click here to see all the photos in our Assessment photo album.

Click here to see all the photos in our Assessment photo album.

In Nov 2016 we did the full ASER oral assessments at all the schools to which we send regular teachers as part of Project Sangamam and Project Pearl.

The schools to which we send computer teachers once or twice a week and schools from other projects Poorna Vidhya and Project Thulasi were not covered. The written assessment conducted in Feb / Mar 2017 covered all of the above schools. The schools covered were as follows,

Given absentees etc., the tests were actually administered to 2881 students.

Over the month of January we designed the assessment papers. Maths tests were developed by Mrs. Meena Suresh of Ramanujan Museum and Centre for Math Resources. In Maths, we set the papers at the same level of difficulty as last year. Last year the papers focused on the 4 arithmetic operations. This time the coverage of areas was a little broader.

Our English tests were developed by Mrs. Jayashree Arun, a volunteer of Asha Chennai and works at P.S. Senior Secondary School in Chennai. In English, last year we had found that the papers for 4th and 5th standard were very difficult for the children. Therefore we decided to make the papers a little easier. We made the following changes.

The assessments were conducted from Feb 14th to March 10th. At Thiruvallur and Chennai (total of 47 schools), we conducted the assessments using the computer teachers from Sangamam Kanini. The advantage was that they were not tied to one school. We trained them on how to conduct the tests. It is very important to conduct the test consistently. The way the teacher answer questions by the children, how and whether they translate / explain a question etc. make a big difference in how the children perform. Some rules we followed are,

Further the teachers should take with them a good number of pencils, erasers, sharpeners, etc. At the end of the test, each student was given 2 chocolates to make them feel good.

The computer teachers were made into 5 pairs. They covered all the schools in Thiruvallur in a span of 8 days – one school a day.

On the whole the assessments were well conducted. There were very few problems in the way they were conducted.

We started correcting the assessments even before they were completed everywhere. Two of the senior computer teachers at Thiruvallur did the corrections for two days a week till everything was completed. They also took the help of two more teachers when they were doing it. They corrected about half the papers. The other half was corrected by a group of volunteers.

Like the administration of the tests, the corrections also needed to be done consistently. Things like, should partial marks be given for a question and if so for what? Should we look for spelling correctness or not? Should we look for full sentence response or is just one word answer enough? Also the people correcting the paper had to keep their eyes open for anything that looks like mass copying or assistance by some adult.

We also created Excel templates for entering the marks. As the papers are corrected these were also entered into the corresponding Excel template for that class/school. These were then processed to load them into the server database. All these were finally made available through our server around the 14th of April.

Analysis of the Performance

Displays at an overall level, at a school level, class level and at an individual student level have been provided on our server. At the overall level we provide a grid that shows the performance of each school / class / subject. The cell is marked green if the school has performed one sigma above the average, red if it is one sigma below the average and white if it is around mean+-sigma. The overall display also provides a comparison of All students vs Girls vs Boys. The performance of children in each of our projects is also listed.

At an individual student level the teacher can see how the student has performed in each question.

Some of the analysis that are still pending are:

Learnings from the Assessments

As always when you conduct a massive assessment across such a wide geography of schools, there is bound to be learnings. Here are some basic things we have learnt.

On the whole the schools where we are continuing to support have done slightly better than last year. We were hoping for a more significant improvement. We found the many of the same problems as last year. We added a few more pointers to the schools in our report this year. These are,

Some of the suggestions we have made for English are,