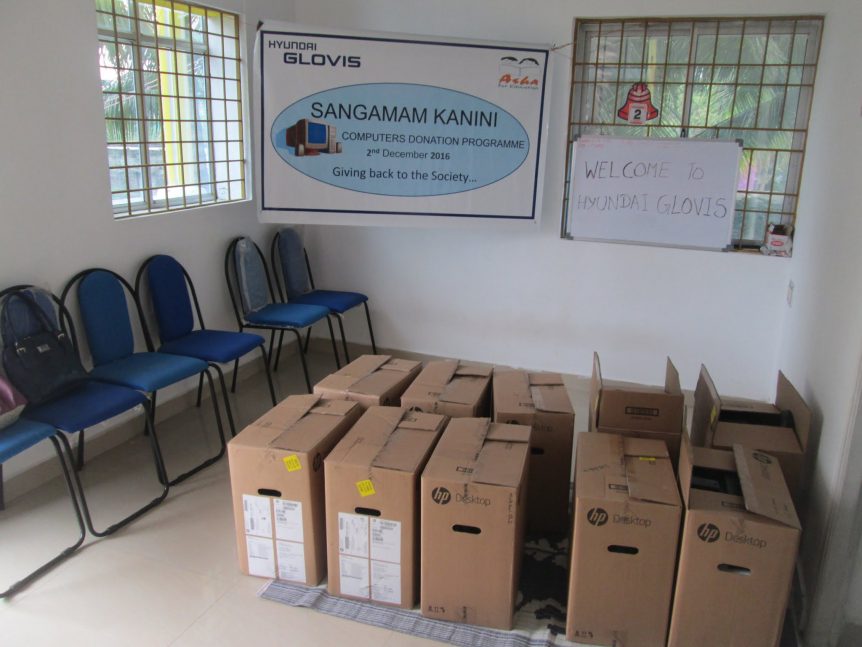 Hyundai Glovis donated 10 used computers to Asha Chennai.These were donated to be given to the schools that we support through the Sangamam Kanini and other projects.

Asha Chennai has been sending computer teachers to over 35 schools through the Project Sangamam Kanini. Our teacher take their laptop with Internet connection to these schools and teach them computer science as well as Maths and English using contents we have provided on the computers.

In many of these schools there are no working computers. In small schools (with strength less than 30) this doesnt create a problem. Our teachers sit with small batches of students (3 to 5 students) and go over things on the computer with the children. The children also get a chance to use the laptop. However with bigger classes it is very difficult to teach anything without additional computers. We have been trying to get used computers from companies toward this need.

Hyundai Glovis has been a strong supporter of Asha Chennai’s projects. In particular through their Glovis Sangamam project they have been supporting eight of the schools in Project Sangamam. They decided to help us by deciding to donate their used computers to us. This will greatly benefit as the computers have at least another 2 to 3 years of life in them.

We have given the computers to the following schools.

All schools below supportd by Project Sangamam Kanini.