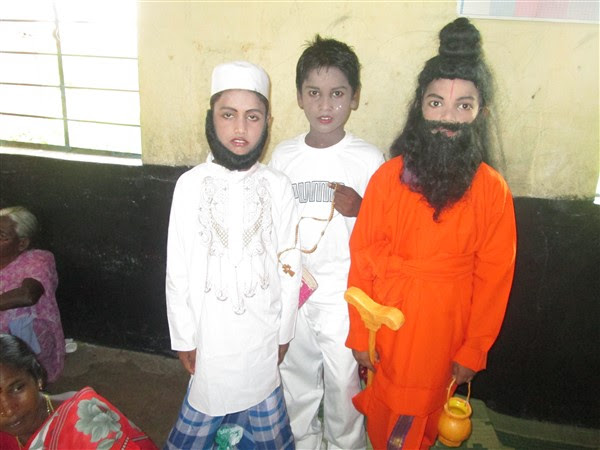 The schools that Asha supports in Sangamam Poondi held their Annual Day Celebrations during the months of March and April and it turned out to be very successful.

A child absorbs information like a sponge and we now know that the more faculties of child’s brain we engage, the more likely they will grow up to be fulfilled human beings. To be successful in today’s world the child needs to learn social skills, creativity, leadership, morals and physical activities. To that end the schools would need to promote cultural, artistic and sports related activities along with academics.

It was heartening to see the Government willing to support that initiative by providing a small budget to conduct the Annual Day Celebrations. Many of the Annual Day Celebrations were muted because of the elections and a directive from the Government to keep them simple, but some were a little more elaborate like the one in Kannigaipair where a few elder statesmen from the town, past Principals of the school and Government officials were invited.

A large number of Parents showed up to support their children in all of the schools. The Government provided a small grant to help with the Annual Day expenses, but the Parents pitched in to pay for the costumes for their children. The kids were thrilled to be in their costumes and assembled in the room before they had to go out and perform. The variety of the programs included dances, drama, solo performances and so on. Parents and guests that came to encourage the children during their Annual Day performance.

Asha was actively involved in all of the celebrations. We provided the prizes won during the Sports Day celebrations. We also provided snacks and drinks for all the Students, Parents and other attendees. For the schools supported by Hyundai Glovis, the funds for the prizes and snacks were provided by Hyundai Glovis who have been very generous partners in promoting the welfare of the students.

Asha Sangamam Poondi coordinator Srinivasan attended all of the Annual Day Celebrations to provide the prizes and snacks and helping with the logistics. Asha teachers at the specific schools were actively involved in organizing the dances and programmes performed by the children. Some Asha teachers from different schools made an effort to visit the Annual Day Celebrations at other schools. Between Rajaram and Venkat, many of the celebrations also had a volunteer representative from Asha.