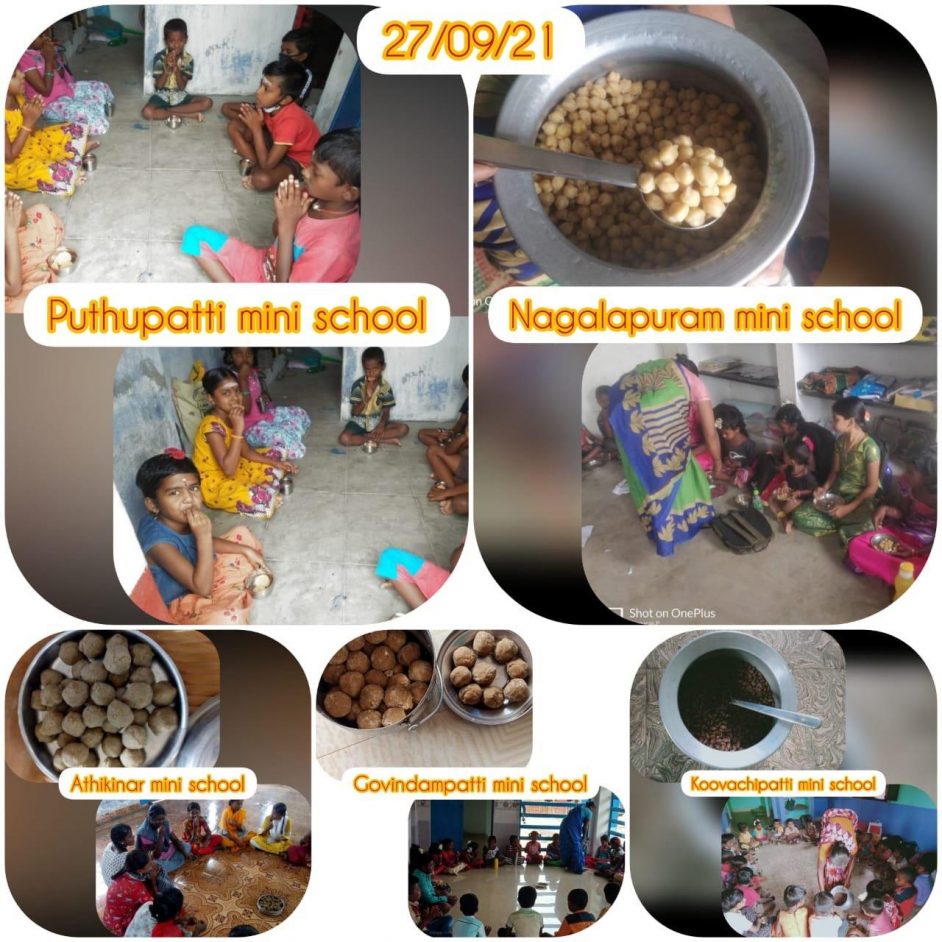 Project Arogyam continues to provide nutrition for children in 16 of our mini-schools spread across our Sangamam, Pearl and Thulasi schools.

Project Arogyam was carried out at the following mini-schools at Project Pearl – Koovachipatti, Nagalapuram, Athikinaru, Govindanpatti and Pudhupatti. At each of these places, we have engaged a person to cook hot nutritious food as snacks for the children.

The mini-schools rotate between the following 5 items:

Murugan distributes all these items to the school every couple of weeks. In particular the grinding of the flours required for the Sathu Maavu Urundai is done commonly and then distributed.
When the project steward Bhaskar and I visited the project on Aug 6th and 7th, we made sure that the different mini-schools served each of these items and we got to taste them. Each of the items was good! We also asked the children what they liked and did not like. Children had a wide variety of preferences that covered all the items. There wasn’t any item that was not liked by many children. I thought it was also very appropriate that one of the persons whom we had engaged for cooking was named Annamudhalakshmi!
Here are some pictures of these mini-schools serving the various food items. 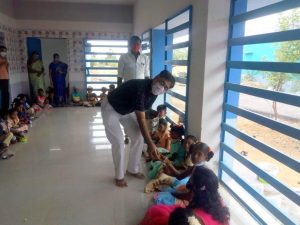 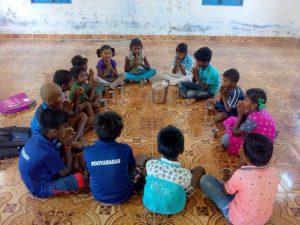 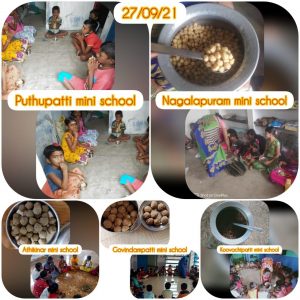 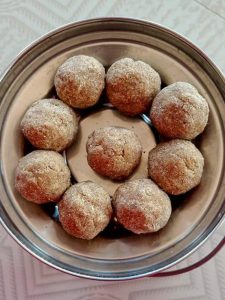 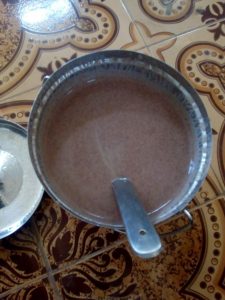 At Sangamam too the nutrition program for this year started in June itself. Here, we have selected some of the poorest areas that we work with for the Project Arogyam. We are covering the following villages: Old Thirupatchur, Ramapuram, Thozhudhavakkam (in Kaivandhur), Thirupakkam, Gollapalayam (in Rajapalayam), Vazhavandhan Kottai (in Katchur), Erikarai Colony (in Palavakkam) and Annanagar (in Thirukandalam). In all these places, the mini-schools are being held at public places (or inside the school itself) and the teachers are not local to the place. This made it difficult for us to make and serve things like Ragi Koozh. For the first 2.5 months we were only giving packaged foods bought from stores at these mini-schools. The teachers purchased these and took that to their mini-schools. They were giving the following items: Biscuits (normal manufactured ones as well as Ragi biscuits), Kadalai Urundai, Pori Urundai, Ellurundai, and Bananas. Every now and then the stores will also give things like Veg Puffs, Tea cake etc. which are not particularly nutritious. Some teacher, of their own initiatives used to cook and take Chana Sundal as well.
We changed this from the beginning of September. We couldn’t find suitable people to do the cooking in the mini-school villages. Therefore we made arrangement through our teachers themselves in the villages where they come from. The teachers will take the cooked food with them when they go to the mini-school.

We are now serving the following items:

I tasted all of these during my recent visits to the project mini-schools. They are tasty and nutritious. And my usual test asking the children what they most liked and did not like, yielded spirited responses and most of the items were liked by most of the students!
Here are some pictures from recent times at these schools showing the new food items. 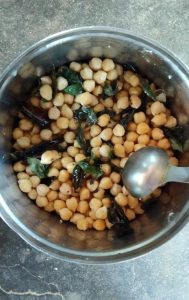 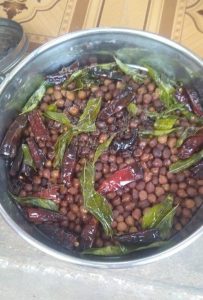 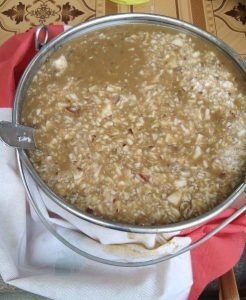 Teachers or their relatives do the cooking usually. I visited all these three mini-schools during my trip there on Sept 3rd and 4th. I tasted the food at all these mini-schools. I particularly liked the Ragi Koozh served at Sathya’s Nallan Pillai Petral mini-school and Seeyapoondi. I asked the children what they liked and they were just as vocal about it as the other two projects. Here are some pictures from the Thulasi nutrition programme.

Financial Update
We received $6000 for this project in early June for the Pearl and Sangamam parts of this project and later Rs 100,000 for the Thulasi part of the project – a total of approx. Rs 5.3 Lakhs.
As of the end of September, the expenses for the project at the various sites were as follows,
Pearl: Rs 98,876 /-
Sangamam: Rs 151,069 /-
Thulasi: Rs 12,952 /-
Total: Rs 262,897 /-
We will be winding down the project when the mini-schools shutdown and the schools reopen. As the schools are scheduled to reopen on Nov 1st, we should have enough money to run the project till then.