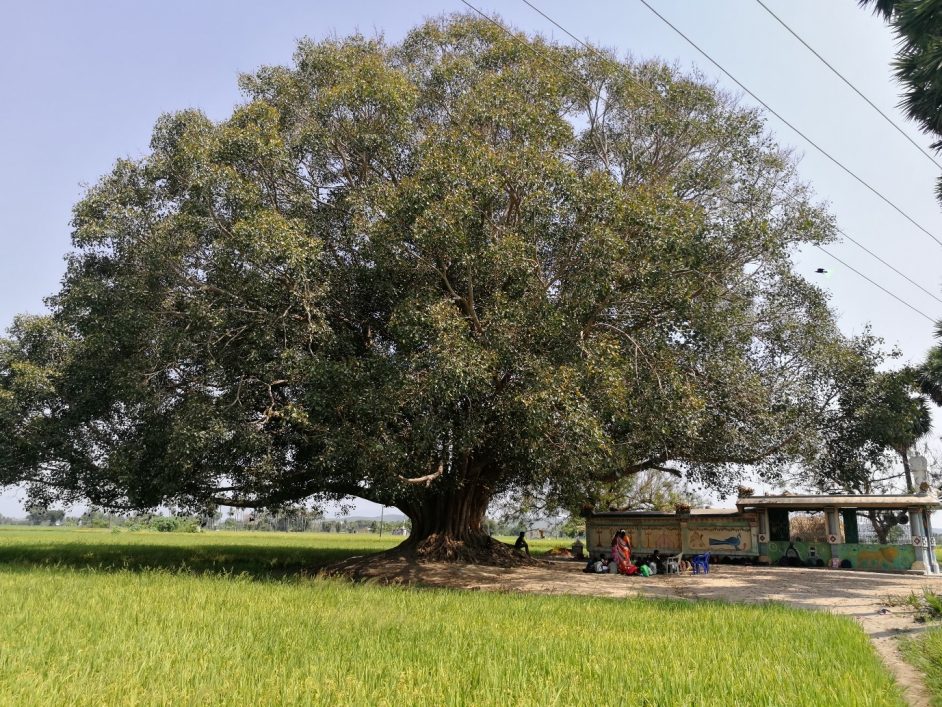 Rajaram, the steward for Project Sangamam visited mini-schools in mid-April. Here is a detailed report about our mini-school at Pondhavakkam which he visited.

Just look at that tree. If you don’t see the mini-school operating underneath it, try to zoom in some more. There are really 30 children and 3 teachers under this grand tree. I had the great fortune to visit the mini-school on April 15th in the morning. I am glad I managed to see this school before the rising Covid cases made such trips much more perilous. It was an amazing sight and I felt I had to write a report just to highlight this tree! Isn’t this just the perfect environment to run a school for children. The lush green fields, the breezy shade and a nice small temple next to the school. Even in April (beginning of summer in TN), it was quite cool under the tree. And the cares of the world just far away! It seemed just picture perfect. I spent some 45 minutes there with the children and the teachers and came away with my spirits lifted.

As I sat down to write about this mini-school, I realised Pondhavakkam also provides a very good study on how we have been running these mini-schools. Many of the adversities that have beset all our mini-schools have also beset our Pondhavakkam mini-school.

Click here to see more photos from the school.

Mini-school at our teacher’s home

Asha Chennai started its mini-schools in early June 2020 across Tamilnadu. The mini-school at Pondhavakkam was one of the first to start on 7th June. We had two teachers Geetha and Sandhiya living in the outskirts of the village. We were also supporting the Panchayat Union school in the village. This was a big Panchayat and the school had a strength of 130+. The teachers’ houses (on the Thiruvallur – Uthukottai highway) was a good 2 Kms from the government school.
Geetha and Sandhiya were related to each other and one of their relatives had an unfinished house. The mini-school started there. Children from their own hamlet (mostly related to them) and from the neighbouring hamlet started attending there. There were about 15 children. The children coming to this mini-school were mostly going to private schools or the bigger govt. aided schools in Thiruvallur.
With the fields right next to the mini-school, the photos from this school were a pleasure to look at sitting cooped up in our houses in the city during the initial lockdown days.

During the first wave of Covid, the fear of Covid struck Pondhavakkam as well. As one person from the village got infected, the school shutdown from June 26th to July 19th. Till the end of August, Hyundai Glovis was supporting this mini-school and snacks were provided to the children. This stopped when the support from Glovis stopped.
Another NGO, really a Christian charity, started another tuition centre in the neighbouring hamlet in September. We knew and even the parents knew that the quality of education imparted by them was poor compared to what Asha was doing. But as the centre was right in their hamlet and they were also giving snacks, and promised some gifts during Christmas, the parents decided to send their children to that other centre. This reduced the number of children attending our mini-school to only some 8 or so.

Mini-school inside the school

We got Sandhiya to also bring the children from their homes to the school from November. She was also assisting Geetha with both the batches. After a month or so, the children from the teachers’ hamlet stopped coming to the mini-school as they did not want to walk the 2 Kms. But the numbers increased further as it was held at the school and the parents realised that the school was probably not going to open anytime soon. Another teacher Dhatchayani also joined Geetha and Sandhiya. Later Dhatchayani moved to another school and another teacher Ramya joined Geetha and Sandhiya. The mini-school saw as many as 70+ children at its peak. Initially the HM allowed us to use only one room. By January, as the strength increased, we were given 2 rooms to use.

But this continued only for another month. By the end of February, as the officials from various government departments started coming to schools to inspect the schools to be used for the elections (held on April 6th), the HM did not want trouble and asked us to close the mini-school. The parents who were sending the children regularly to the school went with the teachers and Srinivasan to talk to the Panchayat leader to allow the use of some other place. They got the temple under the tree!

Challenges faced by our Mini-schools

The story of our Pondhavakkam mini-school shows a lot of things that are common across many of our mini-schools. Mini-schools run at teacher’s residence, the local school or a public place. Pondhavakkam mini-school saw all of the above. Other organisations have in some villages pulled away children from our mini-schools as they sometimes operate closer to the children’s homes and sometimes offer some perks too. This has happened at Goonipalayam, Guruvoyal and a few other places as well.
We have had to struggle to get the permission of the school to run within their premises. Even when such permission was obtained, the government teachers never really took any effort to assist with the teaching of the children. The education of the children was completely managed by our own teachers. Even the facilities of the school were not fully provided for our use. For most part the local schools did not dare to allow us to run our mini-schools inside them. And even when they did, none of the government teachers had any inclination to assist with the teaching of the children. In our entire 65 mini-schools, government teachers have been helping only at 3 or 4 of the schools!
While some 50% of the parents wanted education for their children, it wasn’t something very high in their priority. After all, out of the 130+ children studying at PUPS Pondhavakkam, even at its peak our mini-school had an attendance of only about 75. And when the mini-school moved out of the school to 1.5 Kms away (under the beautiful tree), more than half those children dropped out. This lack of a strong desire for their children’s education was also reflected in the attendance of the children.
All this meant that the mini-schools were often trapped in a remedial mode. There are always children in the class who were coming new or coming after a long break. Teachers couldn’t move on with the curriculum.
It has indeed been an uphill struggle to keep the mini-schools running. If 65 mini-schools were running at the end of the year serving 2000 children, it was only because of the untiring effort of our teachers and coordinators.

Finally Under the Tree

The mini-school started operating from under tree around the 1st of March. Since this is a good 1.5 Kms from the schools, only about 35 children continued coming here. Black boards and other facilities that the school offered also went away. But education continued in some form. When I visited the mini-school in mid April, the children knew their basics and were learning things from their own textbooks.