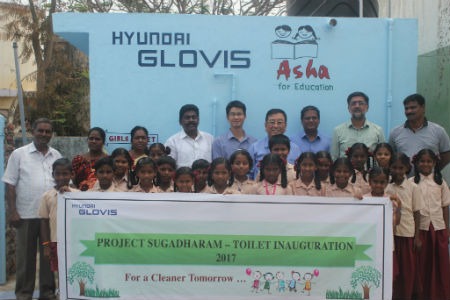 As part of Project Sugadharam, a toilet complex was built for girls at the PUP School Thandalam. This was inaugurated by Hyundai Glovis’ MD, Joo Min on 5th April 2017.

Several of the schools supported by Asha either do not have toilet facilities for the children or the toilets are in a state disrepair. Hyundai Glovis came forward to support the construction and repairing of toilets in several schools in Thiruvallur.

An MOU for this work was signed between Hyundai Glovis and Asha. As a part of this effort we first chose to build a new toilet complex for girls at Thandalam. There was very good support for this effort from the Headmistress of the schools as well as the Panchayat Union president and other functionaries of the village. The work was given to INO Mega Constructions for execution.

Construction of the Toilet

The construction of the toilet stared around the 20th of January. The structure of the toilet building came in an empty area within the school campus. There was already a dilapidated toilet in the place which was demolished. There was also space for a septic tank next to this area.

There were some delays in the construction but the structure was completed by early March.

Click here different stages in the construction of the toilet here: .

Painting of the Toilet

The volunteers had a proper south Indians lunch at the school in the usual plantain leaf. The panchayat union president and other functionaries also joined us during this. The children also received some chocolate and biscuits from the Glovis staff. The work got completed around 3:00 pm and then the staff left.

Completion of the Toilet

The electricity work, the plumbing work, completion of the septic tank etc was completed in the rest of March. The toilet complex with 3 closed door toilets, a urinal area, overhead tanks, a wash basin etc. was fully complete by the end of March.

An inauguration function for the toilet was held on the 5th of April. The 5th standard children started the programme with a good rendering of Tamizh Thai Vaazhthu. The Glovis MD Joo Min and others talked to the children about good hygiene. We also distributed some biscuits, chocolate and juice to all the children. The school children and the teachers were very happy to have a new toilet in their school.

Click here to see photos from the finished toilet and the inauguration function.

We hope to start the repair work of toilets at Annanagar, Kannigaiper and Thandalam (other boys’ toilet) during the summer holidays and immediately after that.