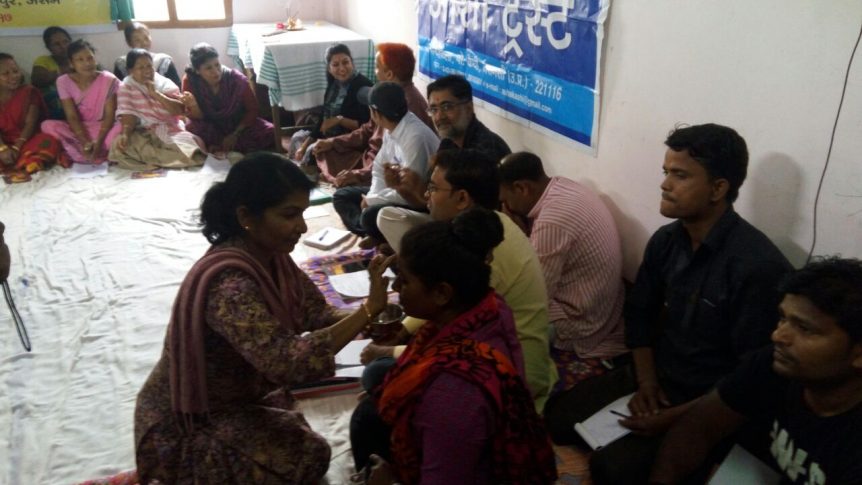 Asha India conference was held at Tamulpur, Assam on March 25th and 26th. Rajaram from Asha Chennai attended the conference.

Click here to see few photos from the conference.

Mr. Rajaram shared about the conference  in detail:

The conference was initially scheduled for Jan 5th ad 6th. At that time a big contingent (4 volunteers and one project coordinator) from Chennai was planning to travel to Guwahati for the conference. When the conference got rescheduled to late March, most people could not make it and finally it was just I(Rajaram) attending the conference from Chennai. It turned out that Rajaram was the only person outside of Asha Assam and UP that attended the conference.

I also mistakenly thought that the conference started on the 24th and reached there the day before the conference. But that was better in some ways as I got the chance to spend some time with Biju and others from Asha Assam. I reached Guwahati by flight fthrough Kolkata at around 2:00 pm. They had arranged a car for me. The drive to Tamulpur itself was quite scenic and the weather very pleasant. It took less than 2 hours to reach there. Coming from a water-starved Chennai, it was a joy to behold the grand river of Brahmaputra and the lush vegetation all along the way to Tamulpur. The terrain started getting hilly as we got closer to Tamulpur.

I spent a relaxed couple of hours there with Biju and Sheetal from Lucknow. Sheetal is an old time Asha volunteer and personal friend of Biju who had come there for a few weeks to train the staff there in weaving. While there were several other helpful, hospitable women who were part of Asha Darshan helping with the conference I couldn’t really communicate with them because of my lack of Hindi knowledge. Generally most Assamese people I met knew Hindi well. Their knowledge of English was much less.

We took a walk to the local market in the evening. I was amazed to see the number of fire flies in that area. I had never see so many of them. I had a quite dinner and went to bed. All the Asha UP folks came in by about 11:00 pm. I woke up to greet Vallabh who was also sleeping in the same room as me.

The conference started in earnest the next day (25th). The meeting started with a song from Asha Darshan volunteers followed by welcome to all others with a tilak. A minute of silence was held for the demise of Lakshmi Suryanarayanan and couple of other long-term volunteers’ parents.

Along with the chapters several related organisations also presented updates on their activities. These updates pretty much occupied the whole day interspersed with some songs, good food and snacks etc. I also had a nice time chatting with boys from Apna Ghar in Kanpur run by Asha (primarily Mahesh). They could talk some English and were really bright. I showed them some of the basic Maths tricks I knew.

On the second day (26th), Biju wanted to me to be able to see some Asha Darshan schools, centres and Bhutan which was within an hour from Tamulpur. I went with Vallabh and Biju to these places. Here is a small update on Asha Darshan’s activities based on my limited understanding. Firstly these areas are the areas of Assam that were most affected by the Bodoland agitations a decade back. Now these areas are quite but you can still see some signs for Bodoland.

They have two or three centres like the one in Tamulpur. These are training centres for local women for most part. They train women in things like weaving, embroidery, tailoring etc. They also get someone to come in to teach computer science once in a while. Many of these receive funding from different branches of the government and only the initial infrastructure if at all is provided by Asha. I also saw the two scooters that Asha Chennai had donated.

I also saw a couple of schools. Some of their schools has been taken over by the government and are now being run as government schools! Ideally Asha Darshan would want that to happen to all their schools. Most of the schools are built of bamboo. Even the houses I noticed were built of bamboo but then packed with clay. The schools weren’t even packed with clay. So they are temporary structures but were quite spacious and looked very good. Unfortunately since I visited them on a Sunday I couldn’t see the schools in operation.

From the second school the Bhutan border town of Samdrup was just some 15 minutes away. They anyway go there to fill in Petrol since it is cheaper there by more than 10%. We just crossed the border took a couple of photos, filled petrol and returned.

We were back in Tamulpur to start the 2nd day’s sessions by about 10:30 am. Most of the topics that are important to us were in the morning session. I presented a presentation on behalf of Asha for Education. This basically clarified the relation between AfE and Asha India. Because of certain fundamental differences, Asha Trust cannot be considered a legal affiliate of AfE. While chapters like Asha Chennai, Bangalore etc. are recognized as Asha for Education chapters the other chapters that have paid staff or fellows are not recognized as Asha for Education chapters. This included the Asha UP chapters as well as Asha Darshan. There was a fixed allocation of $100,000 towards these chapters from AfE central funds. These were explained in the presentation.

Then issues related to Asha Trust accounting and administration were taken up. Here are some points that were discussed and decided on.

The discussion went to the next Asha India conference. I have offered for Asha Chennai to host the next conference. It is tentatively planned for December 29th, 30th and 31st.

The next topic was quality of education and what we as Asha can do regarding that. I talked in good detail about what we are doing with Sangamam Kanini at Asha Chennai. The teachers there also wanted to see the software and the contents we had put together. I also told them of the contents that I knew was also available in Hindi medium. I gave a couple of copies to the volunteers there. I think there is a lot of need for good quality soft-contents everywhere.

After a good lunch, in the afternoon there were cultural programs by children from the communities served by Asha Darshan as well as the boys from Apna Ghar, Lucknow. I had to leave even before that got completed. I left by about 3:15 back to Guwahati to catch the flight to Chennai.