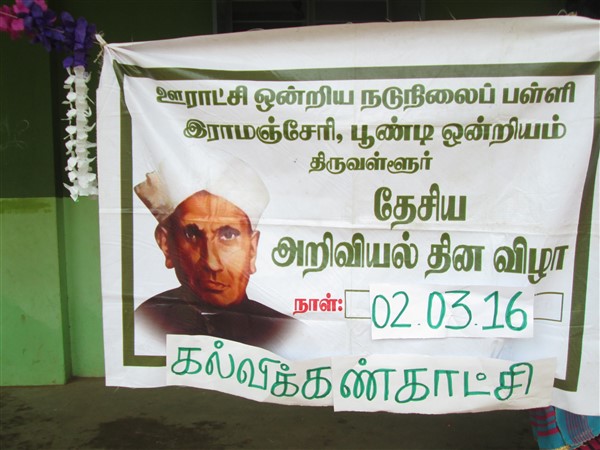 2nd Mar 2016: Science day was celebrated in Ramajeri school and we also organised a Chemistry lecture at the school during the month of March. Further bureaus were also distributed to three schools.

There were several activities during March at the Project Sangamam schools. Ramanjeri school organised a Science day celebration on 2nd March. They has put together displays in the entire school towards this. Further on 23rd March, we organised a lecture at the Ramanjeri school by one Mr. Ravikumar who has worked as a scientist in the pharmaceutical industry for several decades in the US. He gave a talk on Chemistry and how it relates to all things around us. His talk was very good and he would be keen to do it at other high schools if there is sufficient interest. Then during this time we also built a wooden door for a built in cupboard at the school. Finally we distributed bureaus to three schools: Kannigaiper, Ammambakkam and Katchur. Click here for the photos from all these events.